SARASOTA — Duane Betts' 2022 "Dog Daze Acoustic Tour" will kick off with a sneak-peek show at Big Top Brewing in Sarasota, Florida, on Thursday, May 12. The live performance will be the only local show before the trio sets out on the highly anticipated eight-city tour.
Betts will embark on the tour with former bandmates Berry Duane Oakley and Johnny Stachela.
Duane Betts is an American guitarist and singer-songwriter, a Sarasota native who cut his teeth as a teen sitting in regularly with Rock and Roll Hall of Fame inductees, The Allman Brothers Band.

Betts spent nearly a decade playing guitar alongside his father, Dickey Betts, in his group, Great Southern. After relocating to California, he led rock outfits Backbone69 and Whitestarr. Betts was also a touring guitarist for folk-rockers Dawes, and a member of the brief supergroup, Jamtown, featuring G. Love, Donovan Frankenreiter, and Cisco Adler.
In 2018, Betts released his debut album, Sketches of American Music, and toured as a guest of the Devon Allman Project. At year’s end, Betts announced the formation of The Allman Betts Band, officially uniting with Allman, and with Berry D. Oakley, son of the late Allman Brothers Band founding bassist Berry Oakley. The group issued two albums, 2019’s Down to the River and 2020’s Bless Your Heart, before announcing its hiatus in 2022. 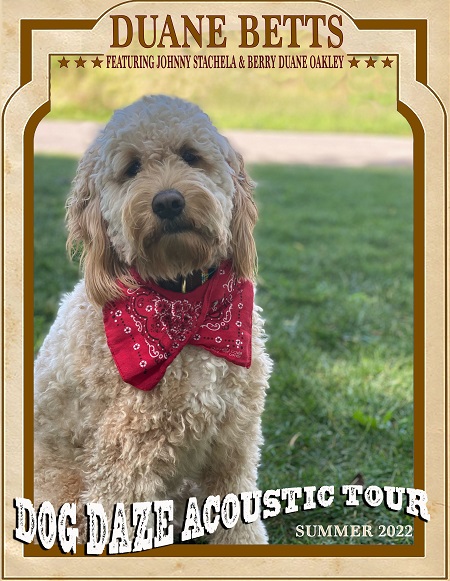 The May 12 "sneak peek" show is from 7-10 p.m. at the Big Top Brewing Company’s Sarasota location, 975 Cattlemen Road. Tickets are $25 plus taxes/fees and can be purchased through Eventbrite.com, or by clicking here.
For more information on this show visit Big Top's Facebook Event Page. To find other dates of the trio's 2022 tour, visit: www.duanebetts.com/tour.
CLICK ON ICONS TO SHARE
FACEBOOK COMMENT POSTING AND VIEWING BELOW