BRADENTON — A major roadway project approved by the Manatee County Commission is advancing forward through the design phase, but some residents who live along 59th Street West have concerns with the project’s initial plans which include widening the 59th Street corridor that connects Manatee Avenue to Cortez Road to four lanes.
The project is one of the county's Capital Improvement Program’s "Big 6" infrastructure projects.
In September, commissioners approved the 2023-2027 Capital Improvement Plan, which included investing $435 million in transportation projects. The county borrowed $232 million through bonds which will be paid back at a 4.09 percent interest rate over the next 30 years. The bonded debt will be used to accelerate 19 infrastructure projects—including the 59th Street West expansion.
District 3 Commissioner Kevin Van Ostenbridge proposed the project. Van Ostenbridge owns a home in a neighborhood accessed via the roadway. During a June 2021 work session, Van Ostenbridge suggested the county delay the previous board's approved project for 59th Street West and Northwest between Manatee Avenue and Riverview Boulevard in order to accommodate the investment of making 59th between Manatee and Cortez four-lanes.
In previously adopted CIPs, the approximate 1 mile of 59th roadway between Manatee and Riverview had been identified for safety improvements, including updating the existing two lanes to standard widths and adding sidewalks and street lighting. Area residents who utilize Warner's Bayou Boat Ramp regularly travel the stretch of 59th from Manatee to Riverview to access the boat launch facility (full disclosure, I personally live along this portion of 59th Street).
There are currently no sidewalks along either side of the road—save for several feet near a bus stop—and no street lights. My own mailbox has been taken out by a vehicle, a tree in a neighbor’s front yard was struck several years ago, a power pole has been hit, and most recently on Christmas Eve night of last year, a pickup truck barreling down the road lost control and plowed into a neighbor's house, crashing through their garage wall and pushing debris into their kitchen.

The improvements to 59th Street between Manatee and Riverview are to be funded by infrastructure sales tax, and earlier CIPs had the project's construction beginning as soon as October of this year. The most recently adopted CIP, however, pushes the construction start date out until 2025 for the safety improvements to 59th between Manatee and Riverview.

Along with the improvements project for 59th Street between Manatee and Riverview, the previous CIP also included two lesser improvement projects for 59th Street West between Cortez and Manatee at 33rd Ave Drive West and Sun Chase Apartments. The previously planned projects included updating the existing two lanes and adding sidewalks and lighting. The lesser-scope projects were projected to cost approximately $10 million combined to be funded by infrastructure sales tax. With the commission's decision to widen all of 59th Street West from Manatee to Cortez, both projects' improvements will now be included within the scope of the more extensive 59th improvement.
Last year, commissioners authorized staff to contract with consultant Kimley Horn and Associates, Inc to prepare a Project Development and Corridor Study Report to evaluate options for widening the roadway along 59th Street West between Manatee and Cortez to four lanes. In April 2022, the recommended option (referred to as alternative two) was approved by the board.
The project is projected to cost just over $31 million dollars, with nearly $26 million of that funded by debt proceeds. The initial design plan calls for four lanes with a center turn lane and/or medians from Cortez Road to Manatee Ave, upgraded pedestrian and bicycle facilities, a roundabout at the intersection of 17th Avenue and 59th Street West (currently a traffic light intersection north of Blake Hospital), as well as upgraded street lighting and traffic signals. The project’s purpose is to improve the roadway to accommodate future growth while improving safety. 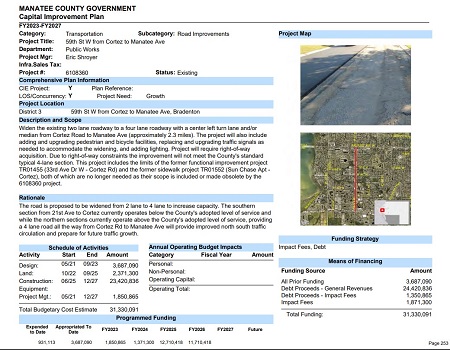 All three of the women agreed that in their experiences 59th Street does not see "backups" in traffic. They admit traffic is slowed to 20 mph during school hours outside in the area around Sugg Middle School, but they argue adding lanes will not change that.

"The school traffic is twice a day, it will take children longer to cross four lanes than two lanes. So the traffic will actually have to wait longer," Bennington suggested.

Concerning safety on the roadway, Kieffer said she is not convinced a significant safety issue currently exists along 59th based on crash data provided in the corridor study report.
"The study's own Crash Analysis is included in the report," Kieffer wrote before quoting directly from the report. "The annual crash frequency generally fell during the study period, with 54 crashes reported in 2016 and 27 crashes reported in 2020."
"This does not appear to show an increasing safety risk, but improving conditions over the years," Kieffer concluded. 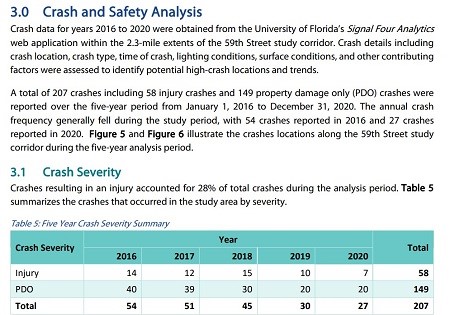 A data table is provided in the Project Development and Corridor Study Report for the widening 59th Street West. To view the entire report, click here.
TBT reached out to Manatee County Public Works Strategic Affairs Manager Ogden Clark to inquire about the project. In an email, Clark wrote that while the project is likely to have some impacts on all properties along 59th Street between Cortez Road and Manatee Avenue, some of the impacts (traffic delays, detours, and construction noise) will be temporary during the build phase. Residents up and down 59th may see permanent changes with county-owned right-of-ways Clark explained, but said it is too soon in the design phase to know how much change to expect and to which parcels.
Concerning communication from the county, Clark confirmed that no letters had yet been sent to residents and businesses who will be impacted by the project, but that is in large part due to the fact that the design is ongoing and in an early stage. Clark also confirmed there has been an adjustment to the project's alignment to spare the previously identified "total takes" to complete the project.
"We are currently at the 30 percent of the design phase and expect to be at the 60 percent by the middle of December," Clark wrote in an email to TBT. "Our current design scope shows full acquisitions are required, but we fully expect the updated plan to remove the need for ALL whole parcel takes."
Clark included, "The BoCC will need to approve the new alignments if the updated plans change elements of the alignment that was approved by the board in the Spring."
The county is planning outreach meetings for early 2023 when the design will have reached 60 percent of the design phase and plans are available for residents to review and provide feedback. Clark said the community meetings are anticipated to be scheduled sometime in late January or early-February next year.
Members of the Concerned Citizens of 59th Street West Facebook group told TBT they look forward to attending the meetings. Wilson, Bennington, and Kieffer also hope that neighbors along 59th Street and the surrounding neighborhoods and businesses will also attend the meetings.
Kieffer told TBT that she was unsure how many property owners are aware of the project coming to 59th, so she personally sent out 327 letters to her neighbors to inform them about the planned changes to the roadway.
"I hope that residents show up to the public meeting that is supposed to be held after the first of the year, whether they are for or against the expansion," said Bennington. "I just want to see citizens participating in the discussion and having a say in what improvements might come to 59th Street."

Dawn Kitterman is a staff reporter for The Bradenton Times. She covers local government and entertainment news. She can be reached at [email protected]