BRADENTON — There are some great shows lined up across Bradenton and Sarasota this weekend and there's no better way to enjoy this weekend’s cooler weather than while taking in some awesome live music. So, grab your sweater and check out the Bradenton Times Weekend Sounds to see what bands you can catch and where.
Stumble Creek
Jiggs Landing Outpost
Friday: 3-6 p.m.
From sweet to sassy, philosophical to irreverent, Stumble Creek is an eclectic mix of Americana with strong folk roots, hot bluegrass flashes, and rock-inspired riffs. Like every good creek should, Stumble Creek offers a range of sounds and sensations that provide a feast for the ears as well as the heart – a one-of-a-kind experience at every bend and turn. The band features Austin Kennedy (vocals, guitar, mandolin), Sara Stovall (vocals, fiddle), Heather Downie (vocals, guitar, mandolin), and Tom Hicks (vocals, upright bass). Cover is $5.
About the Venue:
Jiggs Landing Outpost is located inside the Manatee County Park Jiggs Landing. The outpost features a public boat ramp, fishing, cabin rentals, kayak and canoe rentals, bait shop, and a small cafe—but they are also a live music venue! The outdoor venue is on the Evers Reservoir and Braden River with prime views of the sunset. Enjoy a beautiful natural venue in a historic area in the heart of East Manatee. The café offers a light menu, adult and soft beverages, snacks, and Big Olaf ice cream. 6106 63rd Street East, Bradenton.
Trey Wanvig
Cottonmouth Southern Soul Kitchen
Friday: 7-10 p.m.
Trey Wanvig is a 19-year-old blues guitarist and vocalist from Sarasota, Florida. Despite his age, Wanvig has an exceptional reputation as a performer as well as an impressive resume. The young musician was selected by the Grammy Foundation to partake in their Grammy Music Revolution Project conducted at Ruth Eckerd Hall in Clearwater.
Wanvig has performed alongside many great artists including Eric Gales, Shemekia Copeland, Bob Margolin, Christone "Kingfish" Ingram, Annika Chambers, Janiva Magness, Toronzo Cannon, Paul DesLauriers, Shakura S'Aida, Biscuit Miller, Kenny Neal, Bryan Lee, Doug MacLeod, Ben Rice, Sarah Grace, Tas Cru, Gabe Stillman, Steve Vai, and Eric Johnson. An ambassador for the United by Music North America organization, Wanvig released his first album titled "Roadside Blues" in January of 2018, most of which was written when he was just 14 years old. No Cover. 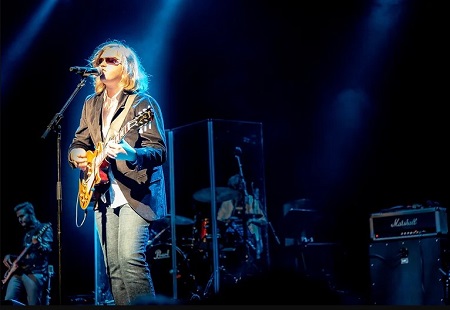 Trey Wanvig /PHOTO VIA treywanvig.com
About the Venue:
Located in Bradenton Village of the Arts, Cottonmouth Southern Soul Kitchen has quickly become one of Bradenton, Florida’s more popular outdoor music venues. Music is hosted on their intimate 80-seat capacity patio garden, a perfect setting under the branches of towering live oaks in the heart of VOTA. Known for his eclectic southern dining, Chef Dave Shiplett puts his creative spin on southern classics serving up his brand of southern soul food in this 100-year-old cottage that doubles as an art gallery. The venue offers craft beer, wine, a list of creative hard ciders, and non-alcoholic beverages. Reservations are recommended due to limited capacity. 1114 12th Street West, Bradenton.
Dead Set Florida
Big Top Brewing Company
Friday: 7-10 p.m.
Dead Set Florida is a Tampa Bay-based band performing music of the Grateful Dead and The Jerry Garcia Band, as well as solo material from Bob Weir and Phil Lesh. The group was founded in 2017 by bassist and vocalist Christian Walker. Walker is joined by Paul Wolff (lead guitarist), Tucker Waud (keyboardist), Michael Garrie (rhythm guitar and vocals), Mike Garrie (drums and vocals), and Michael Pandiscio (rhythm guitar and vocals). Pandiscio is the band’s newest member, joining during the 2020 pandemic. A year later, the five-piece is complete and continuing its mission to keep the legacy of "the greatest musical presence of the 20th century" jamming, spinning, and dancing. No cover.
About the Venue:
Big Top Brewing Company is a Sarasota-based production brewery. Valuing their great town and its great history, they set out to add in great local beer. A compliment to Sarasota’s historical associations with The Ringling Circus, performing arts, famous architecture, the best art and design schools, and world-renowned tourism, Big Top Brewing artistically crafts world-class beers, inspired by their hometown. Featuring brewing, tasting, BBQ, and live music from some of the area’s best performers. A great outdoor venue with an expansive beer garden and porch bar. 975 Cattlemen Road, Sarasota. 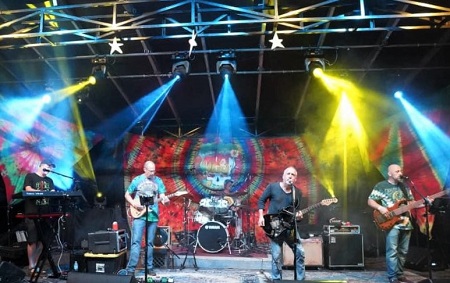 Dead Set Florida
Matt Burke
Bunny & Pirates Bizarre
Saturday: 7-10 p.m.
Matt Burke, lead singer, songwriter, and guitarist of famed local band Have Gun, Will Travel will perform a solo acoustic show in Bunny and Pirate’s intimate beer garden this Saturday. Burke's songwriting draws on western themes of life and death, honor, and morality. Burke will perform some of the songs that have garnished HGWT its popularity among fans adding in a sprinkling of cover tunes. Have Gun, Will Travel has built one of the strongest regional followings on the Gulf Coast in recent years, combining folk, pop, rock, and classic country influences to create a sound all its own. Cover $5.
About the Venue:
Located on Cortez Rd in West Bradenton, Bunny & Pirates is a place where you will feel welcomed. Whether it’s your first visit or your hundredth, the intimate outdoor space is, "like hanging out in a friend's backyard." The pet-friendly venue is a mix of deli, market, and pub. The drink menu offerings range from coffee and tea to craft beer and wine. The food menu includes charcuteries, sandwiches, salads, paninis, and treats. Live music is hosted in the "picnic" beer garden. Call ahead for reservations (941) 281-2582, 12404 Cortez Road West, Bradenton. 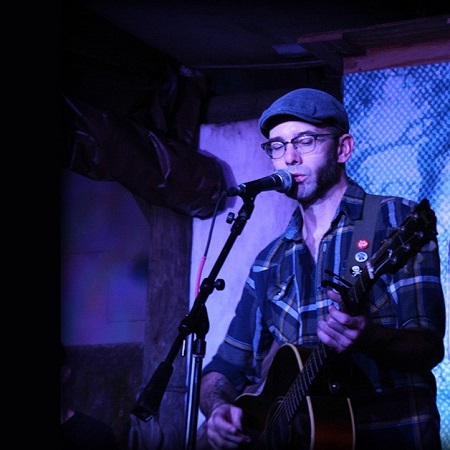 Matt Burke
Absinthe Minded
Oscura Café & Bar
Saturday: 8-11 p.m.
Absinthe Minded is a Sarasota-Tampa Bay-based band playing edgy covers of classic and modern rock favorites. The band playlists include songs from the ‘80s, ‘90s, and the 2000s. The four-member group delivers high-energy performances including drums, electric bass, electric guitar, and driving vocals. No cover.
About the Venue:
OSCURA is the place to go for wet drinks, hot food, and good music. Since reopening as a reimagined coffee café and music venue on June 16 in the historic neighborhood of Old Manatee, it has become one of the newest "places to be" in Bradenton. OSURA-old is back with an expanded menu—including happy hours, Sunday brunches, more live music, flea markets and other entertainment events. 816 Manatee Avenue East, Bradenton. 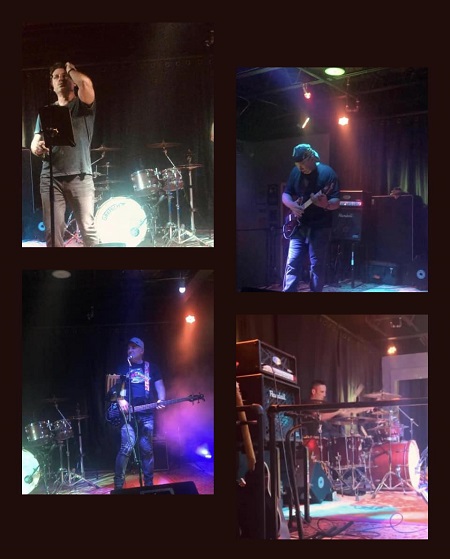 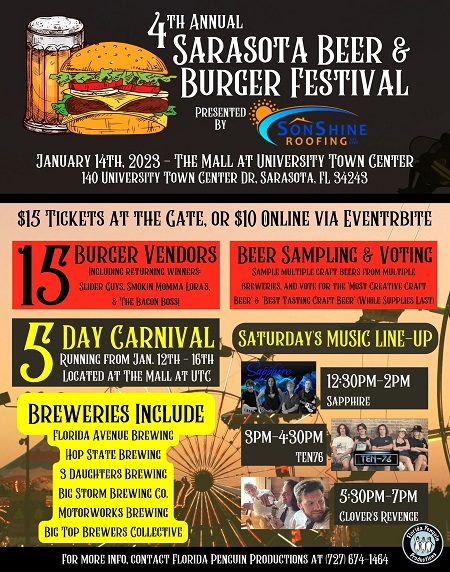 Hymn for Her
Cafe in the Park
Sunday: 3-5 p.m.
Join Hymn for Her (H4H) for this Sunday in Sarasota for songs in the park.  H4H has toured across the country and abroad over the years, injecting juiced-up backwoods country blues with a dose of desert rock psychedelia that has been described as "Hell’s Angels meets the Amish," and "Hillbillies with electronics opening Pandora’s Box." The beloved duo, comprised of Lucy Tight and Wayne Waxing, deliver listeners folk songs with a deep roots vibe. Their instrumentation, while simple, is the perfect backing to Lucy’s moving vocals and Waxing’s tight harmonies. No cover.
About the Venue:
Located in Payne Park, downtown Sarasota, Cafe in the Park captures the spirit of a quintessential urban cafe terrace. It's the perfect place for a great coffee, a fresh sandwich, and live music. The family-friendly spot has menu selections of healthy café-style food, non-alcoholic beverages, beer, and wine, all served in a community park setting. Truly a great place to catch a live show. Please no outside food or drink. 2010 Adams Lane, Sarasota. 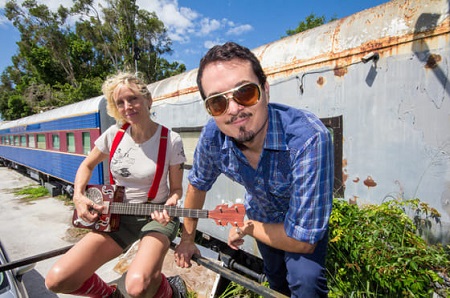 Hymn for Her
RJ Howson & Friends
Big Top Brewing Company
Sunday: 3-6 p.m.
Fire branded in the Chicago blues circuit, roots-rocker and bluesman RJ Howson picked up his skillful guitar chops performing and sharing the stage with blues icons and fellow musicians at Buddy Guy’s Legends, Rosa's Lounge, Kingston Mines, BLUES on Halstead, and many other clubs in the Windy City as well as countless other venues across the Midwest. RJ continues to be steeped in the southern stews since moving to Florida, with openers for Butch Trucks & the Freight Train Band, Dickey Betts & Great Southern, the Atlanta Rhythm Section, Molly Hatchet, Buddy Guy, and a host of other legendary musicians. Having played music beginning in his youth, RJ has played everything from Chicago Blues to funk, soul, rock, gospel, country, salsa, and World Music.
This Sunday, RJ will be joined on stage by bassist Chuck Riley and drummer/percussionist Garrett Dawson. No cover. 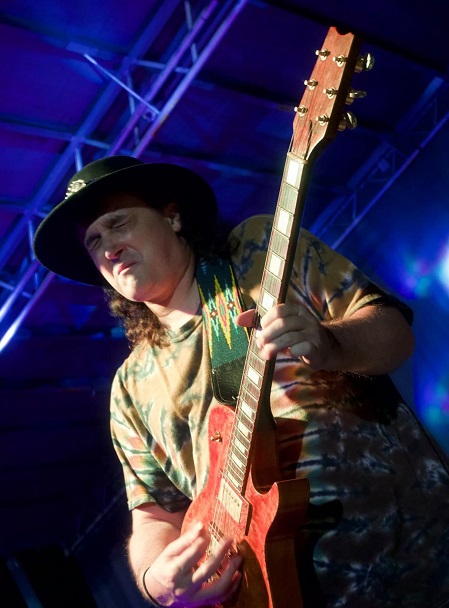 RJ Howson /PHOTO VIA musician's Facebook page
Blues to Blackstreet
Cortez Kitchen
Sunday: 3-7 p.m.
Blues to Blackstreet, fronted by female vocalist and guitarist June Eysel, offers wide-ranging appeal to their audiences. As their name denotes, their style is eclectic, from one end of the genre spectrum to the other—with a little bit of everything in between. The band is known for its ever-diverse blend of jazz and soul with performances of rock, reggae, blues, and pop. The sultry vocal stylings of Eysel complement the band’s broad portfolio. No cover.
About the Venue:
Located in one of the oldest fishing villages in the United States, the Cortez Kitchen is a top destination for locals and tourists alike. Named for the body of water it sits on and known by locals as "the kitchen" due to its bountiful supply of fish and seafood, visitors love the laid-back Florida feel of Cortez Kitchen as well as the live music every weekend. Offering a full bar, old-fashioned seafood, and seaside views. 4528 119th Street West, Cortez, Bradenton. 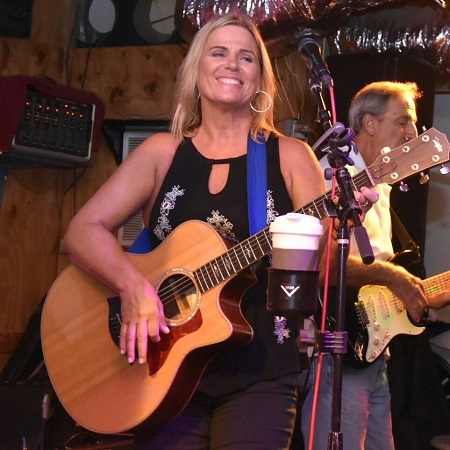 Blues to Blackstreet
For more local music listings in Bradenton and throughout the area, check out GoTonight.com or download the GoTonight app. Know of an awesome local venue or upcoming show?
Email us: [email protected]
CLICK ON ICONS TO SHARE
FACEBOOK COMMENT POSTING AND VIEWING BELOW