Bower Running NPA to Give Voice to Shut Out Voters

Matt Bower versus Kevin Van Ostenbridge, a contest of candidates who share the same Republican Party affiliation, yet face off in the general election. How can that be? For most of us that are voters, we assume that we get to elect those that represent us. Not always. There are loopholes that candidates use to eliminate a majority of voters from participating in the decision as to who will represent them.
While many focus on voting rights issues, good causes such as getting your vote from the mailbox to be counted at the elections office, there are other dirty tricks that deserve our attention. Before that ballot is even printed, the wheels are spinning by those that want control—even when the methods go against our American principles and the idea that you deserve and have a right to vote for who represents you.
Your countywide Manatee County Commissioner for District 7 has already been decided—solely by Republicans—on the August primary ballot. This is because of a loophole. The Florida constitution prescribes open primary elections, in which all registered voters can participate whenever all candidates running are from the same party. However, courts have ruled that Florida Statutes require a write-in candidate to count as opposition in the general election, even though they are not on the ballot and essentially have no chance of winning. Lawmakers have long had the ability to close this loophole in order to respect the intent of the constitutional amendment passed in 1998 but have refused to do so. Most likely because they wish to preserve its use, should they or one of their cronies need to use it.
In August’s Kruse vs. Hunzeker primary contest, in which both candidates were Republicans, the race was closed to only Republican voters by write-in candidate Tom Dell. Dell lives in one of developer Carlos Beruff’s properties, and Beruff was Kruse’s most significant supporter. The exact same technique with Dell as the write-in candidate was used in 2012 when my race against a Beruff-supported candidate was closed off to non-Republicans. Employing this loophole locks out any voter who is not a Republican. About 37,000 Republican votes decided the Kruse vs. Hunzeker race. More than 200,000 voters who would’ve been eligible to participate in this open primary could not.
The Florida Constitution states: ARTICLE VI, SECTION 5 Primary, general, and special elections.—... (b) If all candidates for an office have the same party affiliation and the winner will have no opposition in the general election, all qualified electors, regardless of party affiliation, may vote in the primary elections for that office.
If two Republicans are the only qualified candidates, the intent seems clear: all parties should be allowed to vote in the primary. But that’s not what happens. The state legislature, not the constitution, allows a write-in candidate who hasn’t paid a filing fee and is represented only by a blank line on the ballot to close the primary. If people like our local state Senator, Bill Galvano (who’s currently serving as Senate President) wanted to fulfill the intent of the citizens and the constitution, the easy fix would be to provide a change in the statutes that would place the write-in line on the primary ballot if the only other candidates are of the same party.
Even Carlos Beruff himself, who served on the Constitution Revision Commission a few years ago, could have easily recommended such changes. However, we see by their actions that this is a tool they want to keep so that most voters will never be able to decide who their elected representative will be. The only remedy currently available for a candidate to work around that loophole is to run without party affiliation on the ballot (NPA). So, to be clear, the candidate not wanting to game the system and not wanting to give up their party affiliation by becoming an independent or member of a third party is the one that must run without their party affiliation stated on the ballot.
This year, Matt Bower decided to do just that after the write-in loophole closed off the Republican primary for Manatee County Commission District 3 from a majority of voters. The write-in candidate is a man named Nathan Meyer. Bower’s opponent, Kevin Van Ostenbridge—a realtor who is supported and financed mostly by developers including Carlos Beruff, Pat Neal, and the Benderson family—seems to be an associate of Meyer’s, who often comments in support of Van Osenbridge on his Facebook page.
Bower says his focus is to represent all parties and states on his website, "I believe it is dishonorable to disenfranchise the voters of this community from having a vote." A look at Van Ostenbridge’s website and Facebook postings show no love for Democrats, calling them an extremist party, at least before he had to ask them for their vote this November. 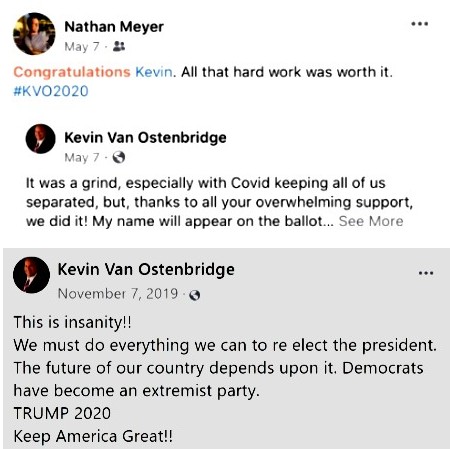 So, this election cycle had two write-in candidates, both with the obvious intent to close otherwise open primaries to just Republican voters, leaving many of our citizens from enjoying the right to vote, as the Florida Constitution intends. Nathan Meyer went so far as to establish an email address of [email protected] The intent of the acts orchestrated by those with direct ties to the developers who seek total control of your county commissioners couldn’t be more obvious.
So, all of the voters of District 3 (consisting mainly of West Bradenton and our island communities) will, fortunately, have a choice in deciding which Republican will best represent them; Van Ostenbridge, a realtor supported by developers who helped prevent most of you from having that voice in an open primary, or Bower, a financial advisor that took that leap to the general election so that all voters in the District can now decide. As a Republican in District 3, I am glad that Mr. Bower took the patriotic step of making sure all voters could participate in our democracy.
Joe McClash is the publisher of The Bradenton Times. He served 22 years on the Manatee County Commission from 1990-2012.
CLICK ON ICONS TO SHARE
Reader Comments
Al Horrigan
SEP 27, 2020  •  How disingenuous Joe. I firmly believe that Matt needs to win because he is our last best hope to keep Beruff from owning the BOCC. However, you and Dennis made that harder by putting the full weight of your thumbs on the District 7 election in favor of the Beruff candidate, who within days of winning the primary came out and said he would have given Beruff even more density than the BOCC approved days before. Now you want to make Beruff the boogieman in this election. Beruff is the boogieman in every County Commission election.
Terry Schaefer
SEP 27, 2020  •  Joe, Thank-you for the clarity on this issue, to my republican neighbors; who is really “rigging the system” as your dear leader often spews?! Mr. Bowers courage is a step in the direction of a pure democracy and I thank him. Terry Schaefer