According to Administrator Hopes, the county organization needed rearrangement to provide better "flow" and efficiency. As Hopes explained to the board in Tuesday’s meeting, every county position previously reported to the county administrator when he was hired by the commissioners in May of last year. Hopes told commissioners it would not be possible to continue to manage the rapidly growing organization, the numerous capital improvement projects, and its budgeting, under the former design.
In the former model, there were two deputy county administrators. Under the reorganization by Hopes, there are four deputy administrators, each of whom oversees multiple departments. Some county departments have been rearranged in the new organizational chart, with some department divisions also getting rearranged under the new format.

Under the new format, department directors will report to their deputy administrators, and the deputies will report to the county administrator.
Code enforcement and the health services program—sometimes referred to as jail medical—will now reside together under the Department of Public Safety. The division of community development was moved under the Department of Community and Veterans Services, formally Neighborhood Services. The division of records management was moved from property management and reassigned to the Department of County Administration, overseen by Deputy Administrator Robert Reinshuttle.
"One of the key functions of records management was public records requests," Hopes explained to the board. "We needed to tighten up public records requests. I felt it was best under the direction of the administration so that when records requests come in what was responded to was what was requested and what we are obligated to produce." 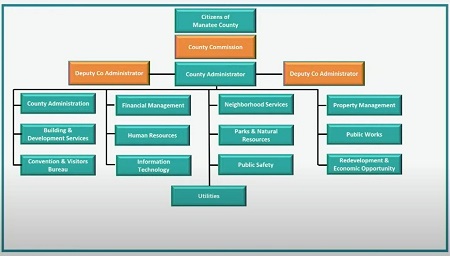 Screenshot of a slide presented by County Administrator Scott Hopes displaying the former way Manatee County government was organized. /PHOTO via Manatee County Government YouTube meeting video
The county’s Chief Financial Officer (CFO) Jan Brewer was reclassified to become both CFO and a Deputy County Administrator. Brewer’s duties now include her prior role as CFO as well as overseeing the departments of Human Resources and Information Technology (IT). At this time, there is an outstanding vacancy for the position of director of Human Resources, but Hopes informed the board in Tuesday’s meeting that the administration’s "number one candidate" to fill the vacancy will arrive this week from Washington State to sit for interviews. The county’s former director of Human Resources, Kim Stroud, was dismissed by the current administration last August.
Deputy County Administrator Robert Reinshuttle—a newcomer as of last June—oversees the departments of County Administration, Community and Veterans Services, and Public Safety. Charlie Bishop now serves as a Deputy Administrator overseeing the departments of Property Management, Public Works, and Development Services. Bishop had previously served the county as the Director of Property Management.
The fourth deputy administrator position created by the reorganization is currently vacant.
The former department of Redevelopment and Economic Opportunity has been eliminated. Hopes told the board that the director’s position for that department was reclassified to become a senior financial analyst position to assist Lee Washington, Director of Community and Veterans Services. 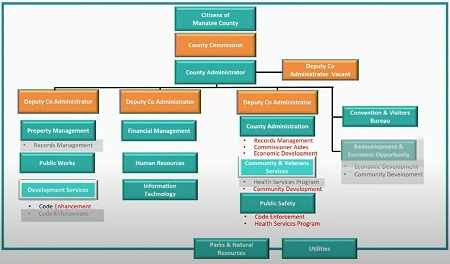 Screenshot of Manatee County Gov new organizational chart after revisions made by the county administrator. Two departments are shown with newly rebranded names approved by the board in Tuesday's meeting. Department division labels in the gray text are divisions that have been reassigned to new departments. Division labels seen in the red text show the new departments the moved divisions now exist under. /PHOTO via Manatee County Government YouTube meeting video
During Hopes' presentation, comments offered by some on the commission seemed to express confusion about the changes being made. While some commissioners expressed concern about lines of communication and access to department directors or staff, other commissioners spoke positively of the changes taking place under the county’s new administration. Much of the dialogue concerning the administrator’s rearrangement of the county organization was related to the topic of commissioner access to staff for communication or requesting of meetings.
"We can say we are not growing government, but we are certainly growing the org chart," said Commissioner George Kruse. "The org chart is much more convoluted than it used to be."
Kruse expressed concern about the appearance of added layers, questioning whether the reorganization would generate improvements in terms of efficiency. The commissioner detailed some of the struggles he has personally experienced when attempting to organize meetings or obtain information needed to conduct his job to the best of his ability.
Hopes clarified for the commission that despite the addition of two deputy administrator positions, those positions were reassignments replacing former positions, and not added positions in terms of "growing the government."
Commissioner Carol Whitmore detailed similar concerns as Kruse, retelling a recent experience of her own that involved challenges with communicating with staff, department directors, and organizing meetings.
Commissioner Reggie Bellamy asked for clear instruction from the county administrator as to any official changes to policy or process for commissioners wishing to communicate with county staff.
"We want to know, is this an official policy? How do we talk to staff? What staff can we talk to?" Bellamy asked Hopes. Bellamy also shared how some staff have told commissioners that they have been instructed to not talk to commissioners directly any longer, something that apparently was not considered off-limits under the previous administration.

Hopes told the board that he was not restricting any commissioner from speaking to staff, but was encouraging them to utilize communication channels through deputy administrators rather than risking the distraction of department directors or staff from their daily work by reaching out to them directly.

Commissioner Whitmore shared frustration at not having phone calls returned or meetings scheduled for weeks out from the time they were requested, and sometimes only to have those meetings canceled. It was also revealed through Tuesday's meeting discussion that department directors are no longer permitted access to the ninth floor where the commissioners' offices reside.
Commissioner Vanessa Baugh spoke favorably of the reorganization saying, "We were asked to contact the deputy administrator and I have been doing that. I have not had any trouble." Baugh told her fellow commissioners that Administrator Hopes is only attempting to "revamp government."
"I think he is doing a great job, he and the deputy county administrators," Baugh added. "They’re working very hard."
Commissioners Kevin Van Ostenbridge and James Satcher also spoke favorably of the changes, citing the efficiency they personally have experienced by the reorganization.


"It is asking a lot for one person to run an entire organization, interface with the community, and interface with the commissioners," Commissioner Satcher said. "I see nine things that are way better and I might see one thing like that I think, gosh, I wish this would get fixed. That’s pretty good, nine things out of ten."
After the presentation of the proposed reorganization and the lengthy discussion with board members concerning changes to Manatee County's Government, the board unanimously approved the reorganization of the county departments as presented by the county administrator in Tuesday’s meeting.
CLICK ON ICONS TO SHARE
FACEBOOK COMMENT POSTING AND VIEWING BELOW