The mind’s eye image of Ireland as a land of shamrocks and leprechauns is one that so many of us share. But sadly, another common trait of the Irish is anything but lighthearted. Their ongoing traumatic experience is termed The Troubles – almost seems like a small problem … The Troubles. But trauma looms large in the nation’s history and is something I have gained a deeper understanding of through my own Irish heritage and during a recent visit to the Old Country, as my grandmother would refer to Ireland.
My maternal grandparents Patrick Hamill and Margaret Mary Livingstone came to the United States from Lisburn, eight miles outside of Belfast, Northern Ireland and married in 1924. This past November, I celebrated my 70th birthday walking the streets of their hometown and along the Belfast Peace Wall as a full Citizen of Ireland. On the way, I had another post-traumatic stress educational experience about resiliency, courage, wisdom and generational trauma.
The legacy of trauma in communities creates a legacy of trauma within families. Intergenerational or transgenerational trauma is a condition in which the effects of trauma are transferred from one generation to another. Multigenerational trauma began decades prior to the current generation,  yet the impact of understanding, coping and healing is passed on within a family. It is even underlined in a well-known Irish Rovers song titled The Orange and the Green, illustrated in such lyrics as:
Oh, it is the biggest mix-up that you have ever seen,
My father, he was Orange and me mother, she was green.
My father was an Ulster man, proud Protestant was he.
My Mother was a Catholic girl, from County Cork was she.
It continues:
One day me Ma’s relations came round to visit me.
Just as my father's kinfolk were sitting down to tea.
We tried to smooth things over, but they all began to fight.
And me being strictly neutral, I bashed everyone in sight. 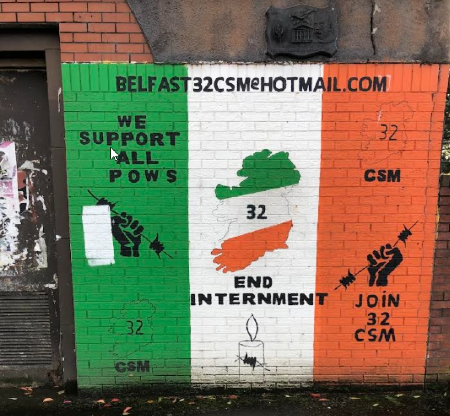 Clever words with a toe-tapping tune, yet the words underline the intergenerational, multigenerational trauma brought on by The Troubles. My wife, Billie and I heard stories from cab drivers during our time in Ireland that underlined the trauma described in the lyrics. The Irish like to engage in conversation and storytelling. And being an Irish Lad, here are a few examples courtesy of three different cabbies:
• One was very proud of his wife being an alumna of the world-famous River Dance tour and now his daughter is as well. His upbeat and positive approach was contagious.
• Our driver from Belfast to Lisburn explained he only drove on weekends as a part-time job and would like to go the "states” one day but he cannot because "they say” he is a terrorist. He went on to explain that the United States’ definition of a terrorist is different than "ours.” The conversation turned to my Irish heritage and family Lisburn roots. When I commented how difficult it must have been that my grandmother’s Mom was Catholic and her Dad was Protestant, the cab drivers demeanor changed and in abrupt manner said "that kind of marriage is worse today.” Anger was evident. 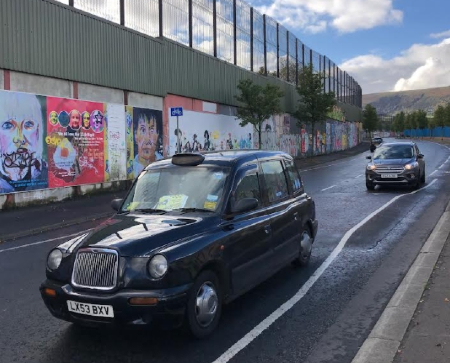 • A third driver shared that he had lived in the "states” for a period of five years and four and a half were in a West Coast prison. He had been arrested for robbery  and my assumption was that it was an attempt to gather dollars for the "cause” – because he said being "dominated” can make people fight back. He was an older gent who spoke of his younger days as a rebel and yet an inner peace was felt from his words this day.
Three stories and three varying approaches by three men who lived in the same community their entire lives.
We had the amazing opportunity to spend time at the Clonard Monastery with Ed Petersen, a Jersey guy who lost that accent and now speaks with an Irish brogue. Ed’s Dad is a longtime friend – we both played basketball at New Jersey City University. He became an FBI Agent and I became a New Jersey State Trooper. His son played basketball at Yale met an Irish Lass, moved to Ireland, raised a beautiful family and does the work of angels with the peacekeeping efforts.
The Clonard Monastery is located on the "borderline” between the Catholic Falls and the Protestant Shankill, along The Peace Wall and at the center of the deep-seated historical conflict. We heard the history while seated in the very room where Father Alec Reid brought together John Hume (SDLP – Social Democratic and Labour Party – Irish Nationalist party) and Gerry Adams (Sinn Fein historically associated with the Irish Republican Army) for secret meetings in the late 1980s to begin a dialogue for a peaceful way out of the conflict. 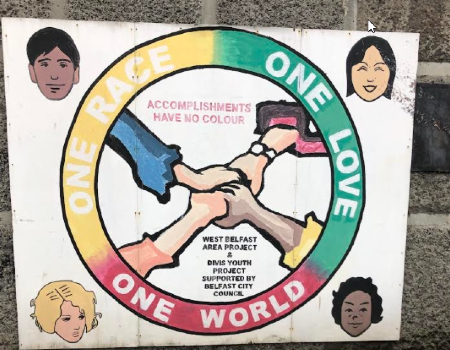 Father Alec Reid, Clonard Monastery, offered powerful words years ago that ring true around the world today "How can you love your neighbor if you do not know your neighbor?” He made it his life’s mission to broker peace.
I have been a student of trauma for the past four decades driven by personal post-traumatic stress experiences. I present worldwide on resiliency, trauma and self-care and more learning comes daily speaking with folks around the globe.
Dr. Richard Mollica, Director Harvard Global Mental Health says; " Trauma is inescapable in life.” We are all exposed to trauma and becoming educated about trauma helps us navigate those invisible wounds.
Education and Awareness programs work – we have done them with HIV/AIDS, alcohol, drugs, tobacco and we can do the same with understanding trauma and it’s psychological, emotional and physiological impact.
Trauma experiences need not solely be thought of as negative. Embracing your trauma can lead to Post Traumatic Growth (PTG), which allows for wisdom and increased resilience to be gained from trauma experiences as well. 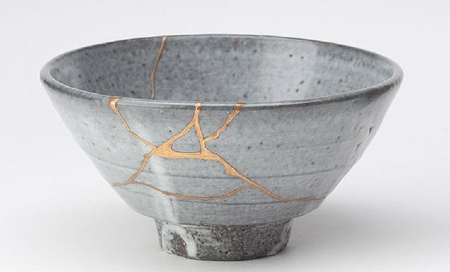 During presentations, I show a photo of a broken pottery bowl that has been repaired by what is known as Kintsugi – the Japanese art of mending the areas of breakage with a gold, silver or platinum dusted lacquer transforming the broken into a beautifully changed piece of art. It reminds me of our humanity and trauma. There is a tendency to throw out what is broken, yet Kintsugi helps us understand that while the bowl may not be exactly the same, it can be transformed to be even more beautiful and proudly displayed.
Awareness to possible multigenerational trauma’s impact on ourselves and loved ones may benefit from Kintsugi when looking back to our pasts. Walking the streets of my maternal grandparents created a new understanding and appreciation for multigenerational trauma by being in "The Old Country.” 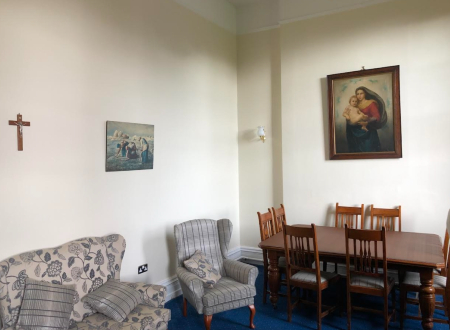 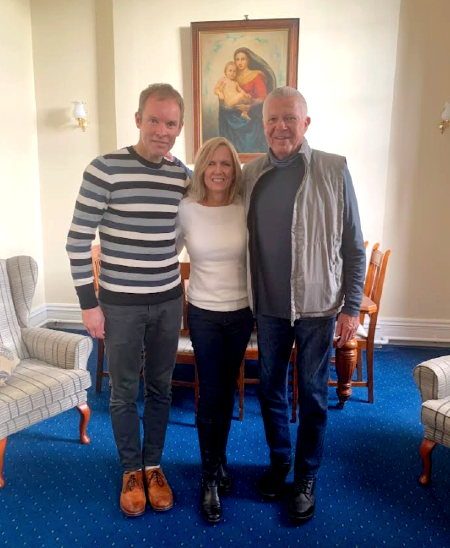 At the Clonard Monastery room where the peace talks took place – Ed Petersen, Billie Delaney, and Bob Delaney.
Bob Delaney is author of Heroes Are Human: Lessons in Resilience, Courage and Wisdom from the COVID Front lines (City Point Press, distributed by Simon & Schuster), pre-order at heroesarehuman.com – book release in September. His previous books are Covert: My Years Infiltrating the Mob (Sterling Publishing) and Surviving the Shadows: A Journey of Hope into Post Traumatic Stress (Sourcebooks). Bob presents world-wide on leadership, resilience, self-care, and post-traumatic stress management.
CLICK ON ICONS TO SHARE
FACEBOOK COMMENT POSTING AND VIEWING BELOW