MANATEE COUNTY — On Thursday morning, the Manatee County Sheriff's Office released unredacted reports, 911 audio, and bodycam footage relating to a single-vehicle accident involving Manatee County Commissioner George Kruse. The accident occurred on April 20 at approximately 7:30 pm, but previously released information was limited to an MCSO incident investigation report that was heavily redacted.
In recent days, Kruse has made statements to local media outlets that the open investigation was "politically motivated" and a "witch hunt," stating that the incident was a minor accident and that he received only a careless driving citation. Kruse has not been arrested in connection with the crash and denies he was drinking at the time of the incident.
The evening of the accident, Kruse was presumably en route to his home in the Grayhawk Landing subdivision. While traveling on Grayhawk Boulevard, Kruse crashed his Ford F-150 pickup truck into a tree, on the opposite side of the road, well onto the grass median.
The F150 pickup truck, having detected a collision and the deployment of the driver-side airbag, automatically placed an emergency call to the 9-1-1 Emergency Call Center. SYNC Emergency Assist is an emergency software installed in certain Ford vehicles, similar to OnStar. SYNC Assist works by connecting through the Bluetooth of the driver’s cellular phone, to emergency dispatch operators. 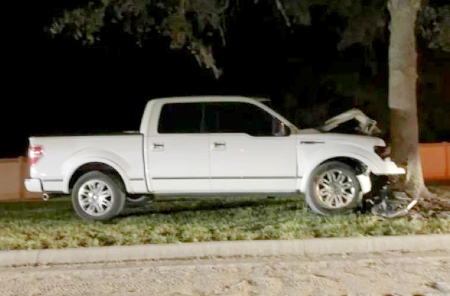 TBT reached out to State Attorney Ed Brodsky, whose office is now in charge of the case, to see whether he planned to pursue charges.
"This case continues to be an active investigation by our office," said Brodsky, "and I must respectfully decline to comment at this time."

A spokesman for the MSO issued the following statement from Sherrif Rick Wells:
"Review of this traffic crash revealed additional evidence that was not available on the evening of April 20. It was important for us to examine this additional evidence and determine who was in physical control of the vehicle when the crash occurred, and to what extent the driver was impaired."
It had previously been reported in other outlets that an internal affairs investigation had been launched, presumably regarding the way the incident had been handled. However, MSO Public Information Officer Randy Warren responded to an inquiry on the status of that investigation by telling TBT, "We are not conducting an internal investigation connected to this case."