WASHINGTON — Local environmental group Manasota 88 joined public health and union groups in a suit filed against the Environmental Protection Agency last week for approving the use of radioactive phosphogypsum in roads. The groups also petitioned the agency to reconsider its October 20 approval.
The EPA has long prohibited use of phosphogypsum in roads because it contains uranium and radium that produce radionuclides linked to higher risks of cancer and genetic damage.
In its recent approval, the agency ignored its own expert consultant, who found numerous scenarios that would expose the public—particularly road-construction workers—to a cancer risk the agency considers to be unacceptably dangerous.
Because the phosphogypsum is likely to be used in roads within 200 miles of phosphogypsum storage stacks, most of which in are Florida, the approval may also affect hundreds of protected plants and animals and their critical habitat.
"This shameless, political favor to the fertilizer industry will have devastating, long-term environmental and human health effects,” said Jaclyn Lopez, Florida director at the Center for Biological Diversity. "Americans should be outraged that the agency charged with protecting us from harm has greenlighted the construction of radioactive roads.”
Since 1989 the EPA has required phosphogypsum to be stored in mountainous piles called "stacks,” because if dispersed, the material would present an unreasonable public health threat from radon gas emissions that would continue for generations given their radioactive 1,600-year half-life.
The EPA has also found that phosphogypsum contains appreciable quantities of radium-226, uranium, uranium-238, uranium-234, thorium-230, radon-222, lead-210, polonium-210, chromium, arsenic, lead, cadmium, fluoride, zinc, antimony and copper.
Phosphate ore, mined largely in Florida, is transported to fertilizer plants for processing by chemically digesting the ore in sulfuric acid. 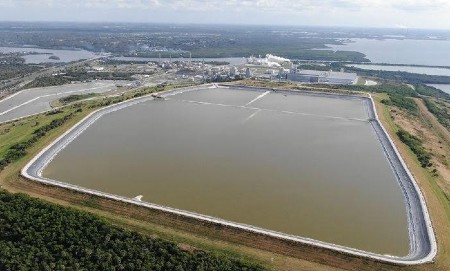 Riverview phosphogypsum stack in Florida. Photo: Mike Knepper.
"This is a slap in the face to the Gulf communities and workers who will be most impacted by this decision,” says Cynthia Sarthou, executive director of Healthy Gulf. "Building radioactive roads is about the dumbest idea I’ve heard of in my 30 years in the environmental protection field. We won’t let this stand.”
"The distribution of phosphogypsum will unnecessarily expose workers, the environment and the general public to otherwise avoidable radiation exposure. To allow the use of phosphogypsum as a construction material is the height of irresponsibility,” said Glenn Compton, chair at ManaSota-88.
For every ton of phosphoric acid produced, the fertilizer industry creates five tons of radioactive phosphogypsum waste. The phosphogypsum must be stored in stacks, and the resulting radon gas emissions must be limited.
The majority of these stacks are in Florida, but can also be found in Arkansas, Idaho, Illinois, Iowa, Louisiana, Mississippi, Missouri, North Carolina, Texas, Utah and Wyoming.
"This about-face by EPA is a big gift to the fertilizer industry. EPA has completely ignored the science and bypassed public input,” said Chandra Rosenthal, director of Rocky Mountain PEER. "Though the Southeast will bear the brunt of this egregious decision, Wyoming and Idaho are also threatened by this idiotic radioactive roads assault.”
"Central Floridians will bear an especially heavy burden of the dispersion of phosphogypsum in roads which are subject to erosion, sinkholes, abandonment and lagging maintenance,” said Brooks Armstrong, president at People for Protecting Peace River. "Gypstacks pose a troubling threat in our area, and we do not want the situation worsened by having this radioactive waste beneath our feet as well.”
"We’re not in favor of building roads out of radioactive material, there’s enough pollution in the air, water and land,” said Milton Cayette treasurer with RISE St. James. "We don’t need any more radioactive waste to be dispersed in the environment.”
"The Sierra Club has fought to limit the environmental and health impacts of phosphate mining in Florida for more than 35 years. The proposed action would reverse decades of important safeguards,” said Craig Diamond, Sierra Club Florida executive committee chair.
In Florida there are 1 billion tons of radioactive phosphogypsum, and the fertilizer industry adds approximately 30 million tons each year.
The U.S. Army Corps of Engineers has authorized an additional 100,000 acres of phosphate mining in Florida, with at least 95% of that phosphate ore to be processed into fertilizer.
The lawsuit was filed on behalf of Center for Biological Diversity, construction unions, Healthy Gulf, ManaSota-88, People for Protecting Peace River, Public Employees for Environmental Responsibility (PEER), RISE St. James, and Sierra Club and its Florida Chapter by attorneys with Earthjustice and Center for Biological Diversity.
CLICK ON ICONS TO SHARE
Reader Comments
Janine
DEC 31, 2020  •  What can I do to stop this from happening? I'm old and poor but still have a voice, Facebook people ignore my post bc if it isn't in video they don't bother to read it! Sad but true.